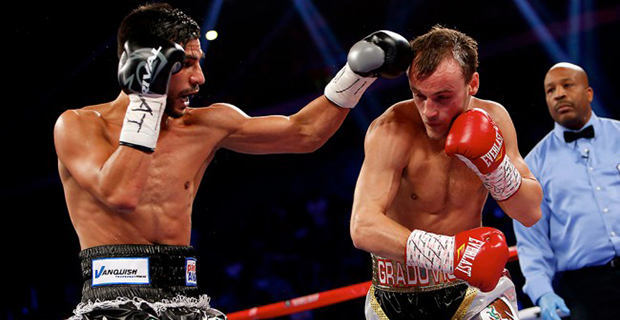 IT wasn’t pretty and at times it was hard to watch. But after ten competitive rounds, Billy Dib made a winning return to the super featherweight division.

On a card that served as a celebration to promoter Curtis Jackson’s birthday, Dib (now 37-3, 21 KOs) kept the celebrations going – albeit short lived – as Dib’s stablemate Mark Davis was crushed in eight rounds in his IBF super featherweight title eliminator against Michael Farenas in the main event.

Despite facing some resistance from the battle-tested Garza (now 26-8-1, 21 KOs), Dib managed to outscore his Mexican counterpart while landing the more cleaner and efficient blows over the ten round duration.

Dib, 28, backed by his manager Emaid Dib and trainer Billy Hussein, was crowned the winner by a unanimous decision, with the judges scores totalling in a 98-91 and 96-93 (twice) margin.

“Sometimes (it) is not always pretty, God is great got the W tonight back in the winning circle,” said Dib from his Facebook page after the fight…read story >