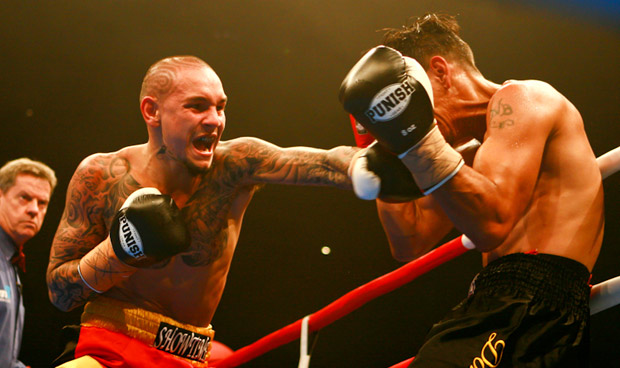 Paul “Showtime” Fleming (born April 3, 1988) is an Australian professional boxer from Tully, Queensland who represented his country at the 2008 Olympics in Beijing, China at Featherweight.

Paul has since made his professional debut (November 2008) against veteran Shane Green, scoring a 3rd round TKO victory in the 6 round bout at the Maroochydore Rugby League Club, Queensland.

In 2010 he relocated to Sydney to live and train with one of the country’s most successful young trainers, Billy Hussein, at Bodypunch Boxing Gym at Lakemba. Under the guidance of Hussein, Fleming was successful in his 4th professional bout against 25 year old Kane Buckley scoring, a 4th round KO and continues to improve as a professional boxer with hard work and dedication.

Paul has since compiled a professional record of 13 wins from 13 fights with 10 knockouts. He is managed by Mike Altamura and Cameron Dunkin and promoted by Top Rank, the Las Vegas, USA-based Promotion Company owned by Bob Arum, and home to many boxing champions inducing Manny Pacquiao, Miguel Cotto and Julio Cesar Chavez Junior.

Fleming finished his amateur career with a record of 83 wins and 17 losses. He claimed many victories and gold medals, and was only the third Australian fighter to ever win a medal (Bronze) in the 2006 World Junior Championships.

Fleming was the first Australian to win the gold at the Pre-Olympic Chemistry Cup in Germany 2008.

At Bejing, Fleming lost 13-9 to silver medalist Khedafi Djekkhir of France. Fleming is the only Australian Olympian to sign a contract with a major U.S based promotional company.